Why Google Could Be a Major Cloud Provider in 2013

I was very excited when I heard the recent news regarding Google’s entry into the public cloud provider space. Right now there are only a handful of true public clouds out there (AWS, Rackspace, IBM SmartCloud, Microsoft Azure and a couple others), with Amazon’s AWS platform holding a significant advantage over any of it’s current competitors. When I started looking into their pricing and features I was a bit disappointed (I understand it’s still in Beta). But overall I’m very optimistic that this move will place Google in a position to become one of the top public cloud providers in 2013 - and here are a few reasons why.

Google knows big data and big data centers. They have been around long enough that they have already built out the necessary infrastructure in order to be competitive in the cloud computing space. Their barrier to entry is already much lower than other providers in the market, and this allows them to tell a more convincing story around moving your applications over to their cloud.

Google has made it clear that their intention is to win on price. This one was area where I was slightly disappointed with the price for the compute and the cloud storage. I ran some basic numbers for the cloud storage and found that for 1 Petabyte of data, you would save approximately 8% a month over AWS S3 platform. 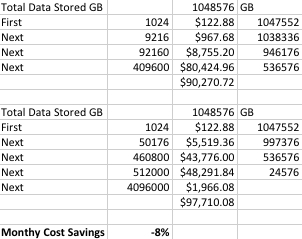 Their compute pricing is similarly discounted for retail pricing only. Google does not yet have reserved or spot pricing for their instances, and until then it will be difficult for long time AWS users to make the move as AWS is likely still cheaper for them. If they intend to capture the market and catch up with AWS, I think they are going to need more aggressive pricing. But, they’ll have to make some bold moves as Amazon has a pattern of decreasing their prices as well.

These guys know all about availability and uptime. The question you have to ask yourself is how many times has Google even been unavailable. Not very many. They know how to build reliable data centers. The real question is if they can bring that experience over to their cloud. If they can, they may very easily win over some jaded Amazon customers growing upset with recent AWS outages.

In my opinion, you need to have at least a compute service to be classified as a “cloud”. Rackspace, Amazon, IBM SmartCloud and Google all have that. Google had jumped in front of Rackspace with their BigQuery service. They have also jumped in front of IBM by having an API based object storage. At this time IBM SmartCloud only provides compute and persistent block storage, no object storage yet.

In some ways the new offering from Google is quite compelling, even while it’s still in beta. Their pricing is good (hopefully better after beta if they really want to capture market share from AWS), and their BigQuery service is also very interesting as well. I’m always interested in any new cloud provider, especially ones that are cheaper and potentially more stable than Amazon AWS platform. The benefits of Sonian being cloud agnostic is that we can leverage new cloud compute infrastructure and object stores when the pricing makes sense. For just being released, I like what I see, but will be more interested to see where they go from here and if they can take away any of Amazon’s massive cloud computing marketshare.

When the clouds battle over price - the consumers win.